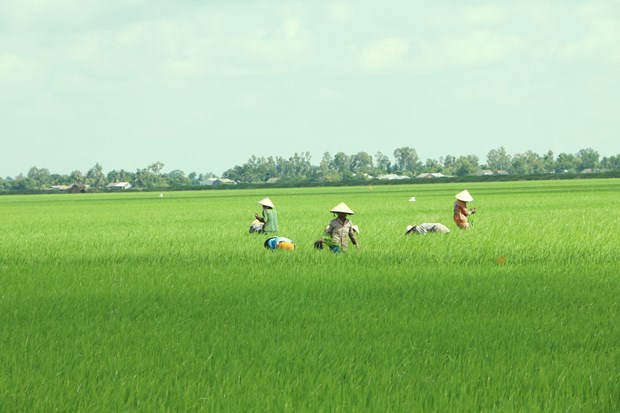 Hanoi (VNA) – The Mekong Delta may experience sooner and even more serious droughts and saltwater intrusion in the 2019 – 2020 dry season , compared to the situation in 2016 when historic saline intrusion was recorded, an official has said.

Director General of the Directorate of Water Resources Nguyen Van Tinh said on December 19 that in the 2019 – 2020 dry season, saltwater intrusion in the region, the largest agricultural production centre of Vietnam, appeared 20 – 30 days sooner than the 2015 – 2016 one, and 2.5 – 3.5 months sooner than the average.

This phenomenon is likely to affect the winter-spring rice crop in areas 50 – 60km away from the sea, he noted.

Although the saline intrusion is predicted to be more serious, the number of households facing water shortage will decline strongly because many lessons were gained from the 2015 – 2016 dry season.

Besides, the Government and localities in the region have developed many irrigation and water supply facilities since 2016. The Ministry of Agriculture and Rural Development has also built detailed scenarios for both short and long terms, Tinh said.

The ministry is scheduled to hold a meeting on drought and saltwater intrusion response in the Mekong Delta on December 25. Meanwhile, the Government will chair another on the issue in January 2020, according to the official./.

Mekong Delta may face more serious saline intrusion this dry season have 417 words, post on en.vietnamplus.vn at December 20, 2019. This is cached page on U.S News. If you want remove this page, please contact us.